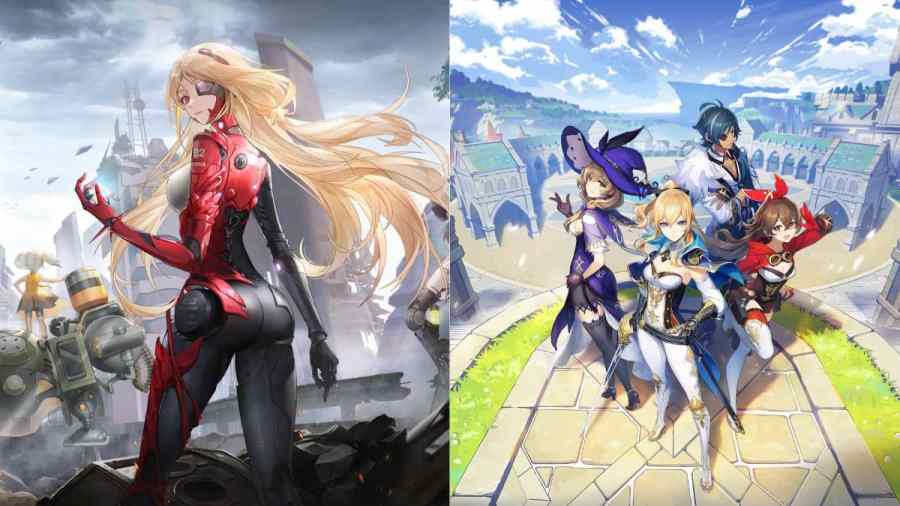 Images via Hotta Studio and Hoyoverse

The comparisons between Tower of Fantasy and Genshin Impact are, unsurprisingly, numerous. It's no wonder fans of both games quickly spotted them. Here's our list of some of the items or systems in both games that share similarities (and differences.)

Related: Is the Pass or Collector’s Edition Pass worth it in Tower of Fantasy?

Exploration in both games can feel quite similar sometimes. They use a stamina bar mechanic to challenge you and sometimes inhibit your progress. Both also give you a gift early on, in Genshin Impact the Wind Glider and in Tower of Fantasy the Jet Pack, to help you find new ways to explore the world (other than run and climb in it.) There is one distinct difference: the Jet Pack will let you shoot up into the air before you start to glide. Take our word for it, it's quite handy and satisfying.

The Spiral Abyss and Bygone Phantasm

Genshin Impact's primary end-game mode, the Spiral Abyss, is fairly similar to Tower of Fantasy's Bygone Phantasm. They both put players in an arena and challenge you to beat waves of enemies within a certain time limit. There are some slight differences in their structure. The Spiral Abyss resets on the 1st and 15th of every month to allow you to repeat the challenge, sometimes with different enemies or blessings that you can take advantage of. Bygone Phantasm is a one-way street. Once you pass a level, there is no going back. The challenge and rewards will gradually increase. The other obvious difference is that Bygone Phantasm is far from the only end game challenge you can take on in Tower of Fantasy. Genshin Impact, well, yeah, that's mostly it.

Statues of the Seven and Omnium Towers

Getting around in both games is fairly simple thanks to Genshin Impact's Statues of the Seven and Tower of Fantasy's Omnium Towers. These not only function as teleport points, but reaching them for the first time will reveal sections of the map. They do have some unique functionalities too. Statues of the Seven can be upgraded for increased stamina and other rewards. Omnium Towers can be used to Teleport to Hycros, a floating island that serves as a home base for the current rulers of the land below. Hmm, we wonder why that sounds familiar?

Artifacts and Matrices (and Equipment)

If there is one thing fans of Genshin Impact agree on, it's that finding that last artifact to complete a set (with the right stats) can be a massive struggle. Tower of Fantasy designed a similar system to boost character stats but divided it into Matrices and Equipment. Matrices, like artifacts, can grant additional bonuses by equipping certain amounts of them from different sets. Unlike artifacts, they don't include randomly enhanced stats. Don't worry, Tower of Fantasy didn't forget the RNG. They included that in Equipment. Time will tell which game's character building system proves more frustrating.

No gacha game is complete without limited currencies. In Genshin Impact, players can receive Primogems for completing daily tasks, opening chests, participating in events, etc. The only other way to get more is to purchase Genesis Crystals and convert them to Primogems. Primos can be used to buy more Resin or gacha pulls. Tower of Fantasy's equivalent is Dark Crystals. There's almost no difference in their function. And again, only time will tell which game tends to give players more of these currencies for free.

While both games share an elemental aspect in their combat, there are some differences. Both games allow the player to take advantage of enemy weaknesses. Tower of Fantasy's elemental system will also allow you to afflict enemies with extra damage or status effects, like flame inflicting a burning effect. However, the elements will not combine to create reactions like in Genshin Impact. There are also more elements in Genshin, seven with the soon to be added Dendro element, than Tower of Fantasy, which only has these three.

Did you notice anything else? Let us know in the comments! You can also check out Best early game Tips & Tricks for Tower of Fantasy or How much have I spent on Genshin Impact? – How to check your purchases at Pro Game Guides.