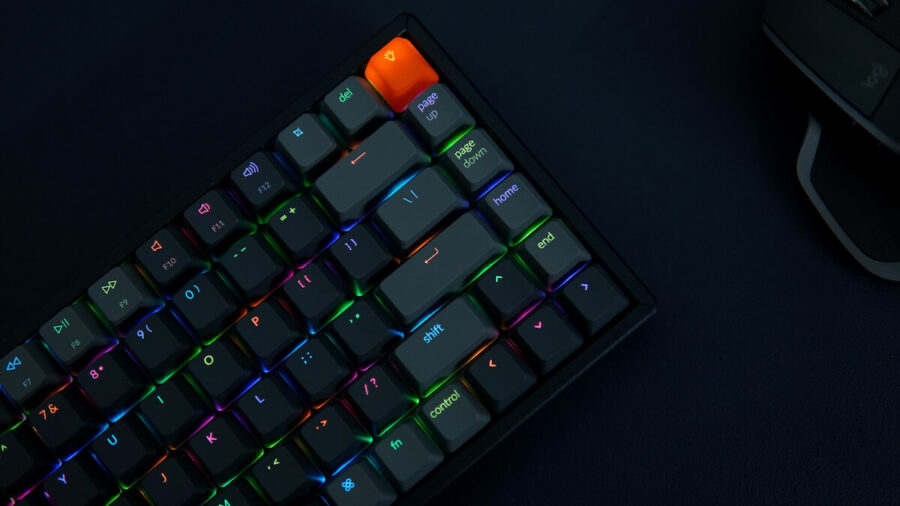 Whoever said silence is golden has clearly never used a keyboard. That satisfying click of a new keyboard as you play you favorite game can be truly satisfying, at least for you. Unfortunately most of us use shared spaces for our gaming time, which means that other people are also subjected to the joyous clickety-clack of PC gaming. And today mechanical keyboards, known just as much for their noise as their performance, are all the rage. Sometimes it pays to find a quieter solution so that you can get some gaming done without keeping everyone up at night.

It's important to note that we will be covering several quiet keyboard options, but these are still far from silent. Even mechanical keyswitches like the Silent Red from Cherry MX still make an audible noise during use. They're just quite a bit quieter than their non-silent counterparts.

The BlackWidow Lite from Razer is a compact ten-keyless design with white backligthing (no RGB here) that comes in black and white (called Mercurcy by Razer). It features their Orange mechanical switches, which is their own proprietary design. While not the quietest keyswitch, even in the world of quieter keyswitches, it does also come equipped with O-ring dampeners. These are actual physical rubber rings that go on the switch itself to help dampen the noise of each keypress, and they provide a pretty dramatic reduction in sound. It's also somewhat professional looking, for those of you wanting to fly under the radar a bit with your gaming gear.

The ASUS ROG Strix Scope Deluxe isn't just a mouthful, it's also a darn fine gaming keyboard. It's a full 104-key style layout with a few unique features. First off it has an extra-wide left Ctrl key, which sounds silly at first until you realize that it means less accidental Windows-key presses while gaming. Because nothing grinds a Fortnite session to a halt quite as fast as minimizing the entire game. The next feature of note is their Stealth key, which immediately mutes all audio an minimizes all open applications. A worthy feature for those of you wanting to get in a game or two while seeming productive. It also features silver colored keycaps for the WASD keys, a quick toggle for shifting between function key layers, a memory foam wrist rest, compatibility with Aura Sync, and an aluminum top plate. Finally, and most importantly for our purposes here, it features Cherry MX keyswitches, notably the Silent Red variant. These linear switches offer dramatically quieter operation compared to their non-silent counterparts.

The STRAFE RGB from Corsair is a well-known, well-respected keyboard in the gaming world. With per-key RGB via Corsair's iCUE software, anti-ghosting, USB passthrough, and a detachable wrist rest it's easy to see why. Like ASUS, Corsair offers the Silent Red keyswitches from Cherry MX to make sure that you'll be able to get your game on in a relatively low decibel way while maintaining the kind of performance you would expect from a Cherry MX keyswitch.

Wait, hold on! Yes, this keyboard is pretty darn plain-looking. No, it doesn't feature high end RGB lighting or media keys. It also doesn't come with giant red and black gamer logos plastered all over the top. However Cherry does offer it with Cherry MX Silent Black keyswitches, which are still a relative rarity in the mechanical gaming keyboard world. In fact, the entire keyboard itself is manufactured by the Cherry themselves, so you know you're getting the real deal. Cherry MX Silent Black keyswitches are similar to their Silent Red counterparts, but offer a higher operating force. So if you're after a solid, full-size keyboard with Cherry MX Silent Blacks and an old-school aesthetic then it's worth taking a look at the first-party offerings from Cherry.

Not everyone is sold on the idea of mechanical keyboards. Sure, they offer reliability, tactile feedback, and a litany of different keyswitch options. But they're also loud and expensive. Sometimes you just want a feature-rich, solid membrane keyboard for your gaming and HyperX is happy to deliver. The Alloy Core RGB is affordable and quiet, but far from barebones. It offers RGB, a keyboard lock mode, dedicated media keys, and spill resistance. And to top it all off it's pretty darn quiet in operation, comparable to Cherry MX Silent Red keyswitches.

The Hades 68 RGB from Duragod is the most compact keyboard we've featured here, but that doesn't mean it's lacking in capability. It features full RGB, a detachable USB Type-C cable, a Windows key lock, an aluminum frame, and support for full custom macros. Most importantly Duragod offers two silent versions: one with Gateron Silent Brown switches and one with Gateron Silent Red switches. Gateron is one of the many high quality Cherry MX clone manufacturers. Don't let that moniker fool you: they're clones, but they're very good ones. In fact, many enthusiasts prefer certain Cherry MX clone brands, like Gateron, to the real thing. The Duragod Hera Compiler software also lets you completely customize the keyboard to your liking.

Look, not everyone appreciates the sweet, dulcet tones of your keyboard slamming around while you game. And there's nothing quite as frustrating as trying to type quietly on your loud keyboard while you're mid-game. If you have to game or type around other people either at home or in the office it pays to invest in a keyboard that you can really open up on without the fear of deafening those around you. No keyboard is going to be completely silent in operation, but sometimes just lowering that volume a few decibels can make all the difference.